LAYING BURIED PIPES
The external load imposed on a pipe of brittle material such as verified clay, concrete, asbestos cement or cast iron are supported mainly by virtue of the resistance of the pipe to circumferential bending. However, a plastic pipe, because it is able to deform to a considerable degree without fracture, is able to derive additional supporting strength from the lateral restrain afforded by the passive resistance of the fill material at the sides of the pipe, which opposes any increase of the horizontal diameter of the pipe. 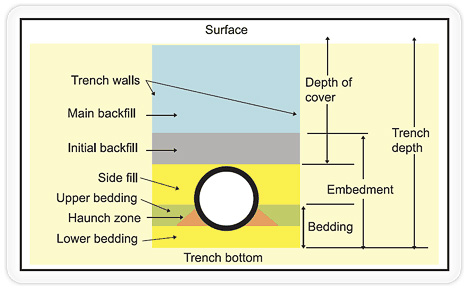 For the lighter gauges of plastic pipe this lateral support is of prime importance in enabling the pipe to carry the external loads without excessive deformation and it is thus important when laying such pipe that adequate precaution be taken to ensure that the lateral support is effective. Because of its softer nature it is also necessary to ensure with plastic pipe that sharp objects such as large flints do not bear directly on it.

The flexible nature of the plastic pipe enables it to accommodate more readily than pipe of brittle material any axial deformations resulting from ground movements or from differential settlements of structures to which the pipe line is connected.

Buried pipes are not normally subjected to large temperature variation, and in cases when positive joints are used the temperature movement can usually be taken up as elastic strain in the pipe. However there may be an exceptionally large change of temperature immediately after backfilling, or on filling the pipe with liquid. Because of the low relative density of the plastics pipes their readiness to float when empty in waterlogged ground is much more obvious. Therefore such pipes require more substantial earth loading immediately after laying than that require by the heavier material.

Since the pipes up to nominal size up to 6” can be jointed on the surface and subsequently ‘snaked’ into the trench. it is not necessary to dig jointing holes and wide trenches in which men can work. Advantage may also be taken of the lightness, flexibility and smoothness of plastics pipes by adopting the economical mole ploughing technique.

In uniform, relatively soft, fine –grained soils free from large flints or stones or other hard object, and Where the bottom can readily be brought to an even finish providing a uniform support for the pipes over their length it may be permissible, more especially with class C or heavier gauge pipes, to lay them directly on the trimmed bottom of the trench. In other cases the trench should be excavated to a depth below the bottom of the pipe sufficient to allow for the necessary thickness bedding material.

BEDDING AND SIDE FILLING

The care required with the bedding and side filling depends to some extent on the wall thickness of the pipe employed. The following relates particularly to pipe thinner than class C, and to pipes of nominal size 3 and above. Clay is unsuitable as a bedding or side filling material. Some other soils as excavated from the trench, such as free-draining coarse sand, gravel, loam, and soils of a friable nature and of an adequate compaction fraction to provide support for the pipe may be suitable. Soils such as hard chalk, which breakup when wetted should not be used.

If the material excavated from the trench is unsuitable, then granular material should be imported. The most suitable is gravel or broken stones from 10 to 5mm in size since it requires little compaction, but coarse sand, or sand and gravel from 20mm and less in size as it comes from the quarry is acceptable provided it complies with test requirement. An excess of fine particles makes the material more difficult to compact when damp.

The thickness of bedding under the barrel of the pipe should be a minimum of 100mm. In every wet or soft conditions or where the trench bottom is very irregular it may be necessary to increase this thickness. The bedding should be properly compacted to provided a uniform bed for the pipe. Bricks or other hard material should not be placed under the pipe for temporary support.

The material from the trench may be used for the remainder of the backfilling, except that special consideration of its suitability may be necessary where the risk of surface subsidence is a consideration. Under the road, It should be compacted in 300mm layers, or in compliance with any special requirements of a local or other authorities. Heavy mechanical compactors should not be used until the fill has reached a depth of at least 300mm above the top of the pipe.

With less than 450 MM of cover else where than under roads, concrete slabs on cushion of filling material above the pipe should be used as a protection against picks etc. At shallow depths under roads special consideration should be given to all the engineering factors involved, such as the class of road, its construction, the class of pipe being laid, and proximity of other services.

Pipes above natural ground level which are subsequently to be covered with fill should preferably not be until the disposition and compaction of the fill has proceeded up to a height of about 1 meter above the level of the top of the pipe.

Mole ploughing is a method of pipe laying which eliminates the need for conventional trenching. Ground conditions impose considerable influence on the viability of employing the mole ploughing technique and it is, therefore, essential to carry out a preliminary ground survey before deciding to use it. Conditions that should be avoided are rocks, flints, tree roots, existing buried cables and pipe lines, etc. Although little difficulty would be encountered with gently undulating ground, a violently irregular surface would not be suitable. Investigation of sub-soil conditions may be carried out by piercing the ground, at intervals, to the depth at which the pipe will be laid.

The mole plough is a piece of equipment that cuts turf and sub-soil, at the same time forming an underground channel into which the pipe may be pulled.

In suitable soil, plastic pipe can be pulled into position underground behind the mole plough. Pipe up to at least nominal size 18 have been laid this way. Slit trenches have to be dug for the start and finish of each length pulled in, the length of the slit trenches depending on the flexibility of the pipe. The mole should be followed by an expander, the diameter of which is at least for the length 75 mm greater than the diameter of the pipe which connected to it. This method of pipe laying best carried out in relatively firm clay where the mole channel can be expected to stand up at least for length of time required to pull the pipe in.

If there is insufficient clay for the mole channel to be self-supporting, it will collapse behind the mole and the friction generated on the sides of the pipe will be such that the pipe may be stretched and there by weakened, sometimes to the point of destruction. In such cases a cable –laying machine may be used. With this machine the pipe is not laid out behind the mole and pulled in by it but, instead, it is laid out in front of the machine, the pipe passing over the machine and down through a wider slit behind the mole blade and into the channel. By this method the pipe is not dragged through the soil but is merely placed in to position by the cable layer.